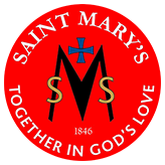 We need to raise approximately £100,000 to upgrade our heating system at St Mary's Church - If you can help please contact us or Fr Martin.